And the official LinnStrument synth 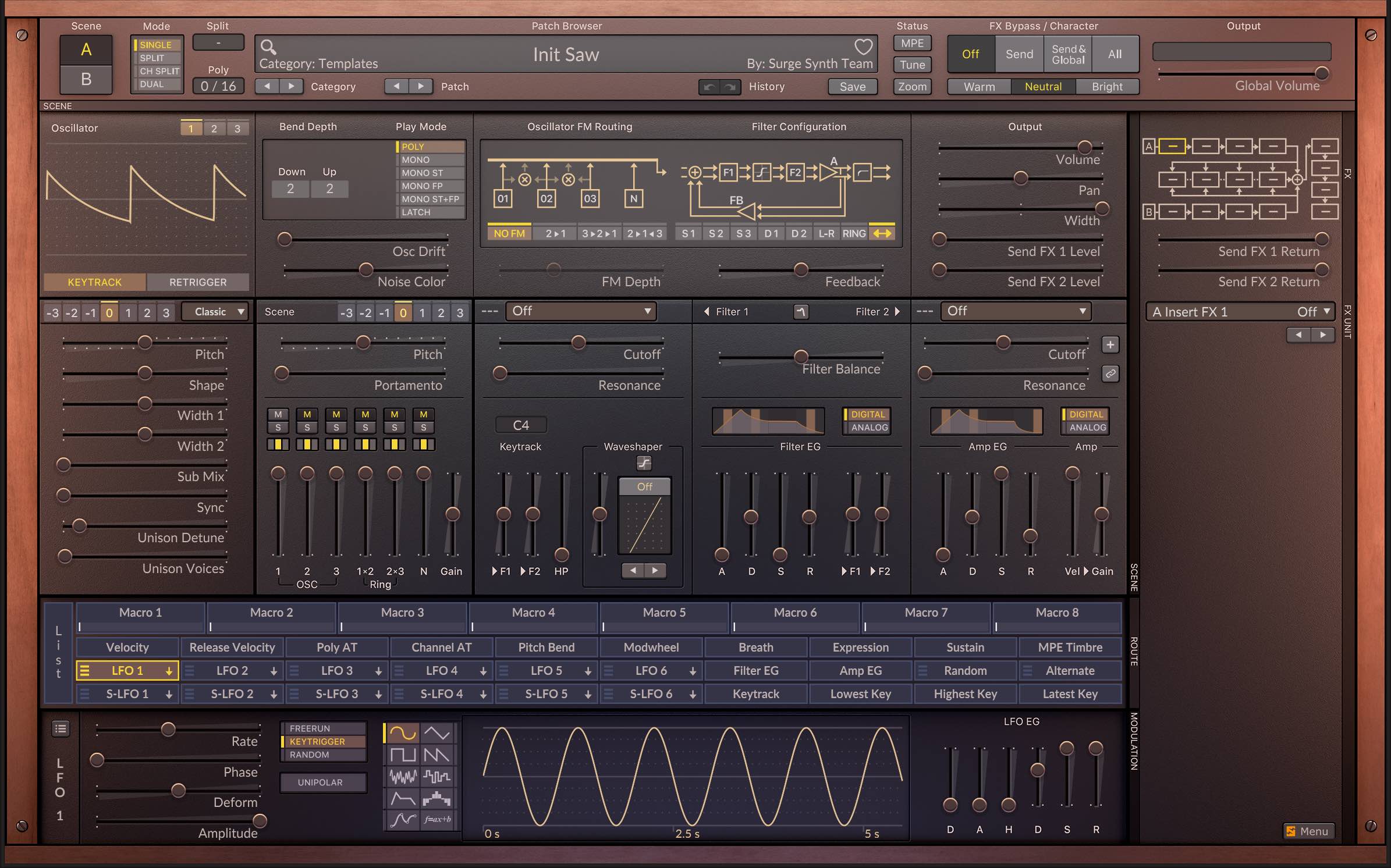 Surge XT is my new favorite synth and the new official synth for LinnStrument. Unless I need samples, it's my new go-to synth. Why?

* Extremely versatile, enabling highly complex and beautiful sounds
* MPE compatible
* FREE and open source
* Runs on Mac, Windows and Linux, both as a plug-in and as a standalone app.
* 2 "scenes" (voice partials), each containing 3 oscillators and 2 multi-mode filters
* Highly versatile oscillators: classic, wavetable, FM, a unique variant of wavetable called "window", Karplus Strong string synthesis, additive, and more, all with a wide variety of ways to modulate the timbre, ideal for LinnStrument's Y-axis control.
* Just about everything can be modulated by just about everything, and in a simple and intuitive way.
* Lots of effects: delay, reverb, chorus, distortion, rotary speaker, EQ, compressor/limiter/expander, frequency shifter, vocoder
* The Distortion effect has pre- and post-EQ, good for guitar amp simulation.
* The manual is easily accessible from the panel's "menu" button. Why doesn't everyone do this?

Surge is maintained by a group of talented coders, but was originally created by Claes Johansen, the principal creator of Bitwig Studio and one of my favorite music software creators. So the fundamental architecture is well-designed and extremely capable.

Download Surge and play my "LinnStrument MPE" library of sounds:

2) The default appearance of Surge XT doesn't look so pretty to my eyes. To change it to look like the picture above, click Surge XT's "Menu" button in the lower-right corner of its panel, then select "Skin Library...". Then download the "Royal Surge XT" skin folder. Then click the MENU button and select "Install a new skin..." and navigate to the downloaded folder to install it. Finally, close and reopen Surge and click the MENU button again to select "Skins", then select the new "Royal Surge XT" skin.
‍
3) Set your LinnStrument for MPE play: In Per-Split Settings > MIDI Mode column, hold "ChPerNote" for 1 second to change all needed settings for MPE play.

4) Start up Surge, then turn on the "MPE" button in the top middle of its panel. Now all of Surge XT's built-in sounds are MPE-compatible, permitting polyphonic pitch slides and performed vibrato. However, these sounds are optimized for MIDI piano keyboards so most won't respond to pressure or Y-axis. To hear MPE sounds optimized for LinnStrument, look in the "Third Party Patches" category for the "LinnStrument MPE" folder, which contains MPE sounds specifically designed for LinnStrument, created by me (Roger) and other LinnStrument players.

Here's a video in which I demonstrate some of the "LinnStrument MPE" sounds:

Since the current version of Surge XT was released on November 1, 2022, we've added some new sounds. If you'd like to get the updated version of the library:

Big thanks to thoughtForm for contributing most of the above sounds.
‍

Care to contribute to the library?

If you're skilled at creating good MPE sounds, please email any good ones to me for possible inclusion in the "LinnStrument MPE" library. In general, I'm looking for sounds that LinnStrument players value most, as suggested by the sounds they use in their videos. In general, these are rich, complex sounds with an acoustic or natural quality. Though LinnStrument videos often use samples, Surge is not a sample player. However, it does have extensive capabilities for complex acoustic-like sound sources.

In general, try to create sounds that are complete and expressively playable musical instruments. Here are some suggestions:

* Focus on sounds intended for LinnStrument's focus on playing expressive notes and chords, instead of sound effects, sequences, highly dissonant sounds, sounds swimming in effects, or sounds intended to produce an entire soundtrack by holding down one note.
* Use rich, complex, acoustic-sounding timbres instead of simple, buzzy oscillator waveforms.
* Though Surge is not a sample player, you can embed a wave file into a patch for use either as a short one-shot sample at the start in combination with other generation methods, or by using Y-axis as an index into the wave file to produce a continuous variety of timbres. The sounds by "thoughtForm" in the Winds folder are excellent examples of this.
* Use pressure or velocity to control harmonic content as well as volume, for a more natural dynamic reponse.
* Use Y-axis to vary timbre by altering the waveform in some way instead of merely controlling filter frequency. In consideration of LinnStrument's short Y-axis range, Y-axis timbral changes should be subtle and usable in all positions, changing timbre without changing apparent volume.
* Fine-tune your velocity, pressure and Y-axis response, throughout the pitch range, such that a skilled player would find it useable to produce a quality musical performance in all pitch and loudness ranges.
* Don't use too much reverb or other effects. Many people don't know Surge well enough to remove reverb, but anyone can add reverb outside of Surge. That said, light reverb serves well to augment a sound.
* Maximize the output volume so that the output meter is at full when playing a chord or forcefully-played solo sound, such that switching between sounds in the LinnStrument MPE library maintains a similar volume.
* Use short, descriptive names that people will find most helpful in finding the sound they're looking for. Don't use non-descriptive joke names or long names that might not fit in the patch display.
* If there's anything that would be helpful for the user to know in order to get the most from the sound, put it in the patch comments.
* For ideas and to learn the many techniques in Surge, try looking into the current sounds in the LinnStrument MPE library to see how they were created, as well as other sounds in Surge's factory patches.
* You can repurpose one of Surge's LFOs to act as a Pressure Response Curve, permitting any curve between linear and exponential pressure response. Click here to learn how to do it.

In the sounds I've created for the library so far, I certainly don't achieve all of the above goals, but I feel that my stated goals for this library are appropriate for LinnStrument players. Note that if a sound doesn't fit the goals of this library, it's still a good sound for a different library, or perhaps the Surge team would like to add it to their Third Party Patches.